Winning a prize at my first hackathon: the story of Meloread

January 24, 2018
Edit 1/3/2018: I'm so sorry this blog post took so long to publish. I forgot to schedule it correctly, and thus it ended up getting pushed back later and later until I remembered to publish it. For reference's sake, I originally wrote this post on 12/4/2017, one day after the hackathon.

I have never been to a hackathon before, so when the Ventura County Office of Education started advertising the Hackathon by the Sea, I was quite excited. Although I had my reservations about staying up the entire night (another thing I have never done in my life), I thought overall the hackathon was a great experience. 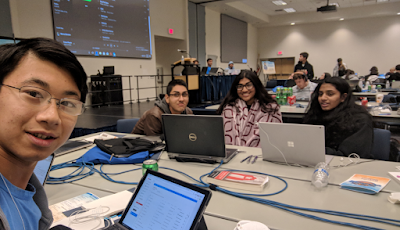 Initially, the plan was find others that also went to Westlake High School in order to develop a winning idea. found included Adam, Inaya, Himani, and Adele (Pictured from left to right is me, Adam, Inaya and Himani.) At the beginning, we split off into groups to go to the presentations as well as think up of ideas to build at the hackathon.
Eventually, these groups would stay split (albeit somewhat unintentionally) as well would develop our own ideas. Jane and I had an idea to build an app that plays music automatically based on the current reading material. Adele built an Android app, and Adam, Adele, and Himani were in their own group. To be honest, I don’t know what they built, but I’m fairly certain they were able to present something in the end.


At this hackathon, they had a program of events at both the evening and in the morning, and allowed students to choose to decide whether they would work through the night or not. Most did, including Jane and I. (Almost. We both took short naps around 9am.) The programs varied from introducing basic concepts of pitching, to some kind of ‘kids’ version of the Arduino, among others. We went to one session, hosted by LinkedIn, demonstrating the Microsoft Hololens. (I recorded a vlog for this, although it will take me a long time before I get around to editing the video.)

I thought the Microsoft Hololens was an extremely cool piece of technology. The extent of my AR experience prior to this were ARKit demos with the iPhone X and ARCore demos with the Pixel 2. While many of these demos were cool in the sense that the demonstration of a working technology ready for consumer market was there, I was extremely surprised by how well executed the Microsoft Hololens, for a first generation developer kit, actually was. The entire unit was ‘headless’ and had good runtime and battery life, had smooth head tracking and overlaid information on the real world in an accurate 3D space, assuming it was set up correctly.

After the presentation, we decided to explore ideas of what we would do for our hackathon project, and looked at a possible idea of using Bluetooth beacons. After discovering possible difficulties with creating a ‘hack’ based around hardware, we decide to shift to creating a Chrome extension called Meloread. While I will be explaining this in a different post, the basic premise of the extension is that you are able to listen to music that matches the mood of the text you’re currently reading. You can try it out by downloading it from the GitHub releases page of the project right now!

In this post, I’ll be talking about my experiences at the hackathon. This was the first time I had ever pulled an all nighter, and although it was stressful, it was decently fun. Jane figured out how to interact with the APIs (namely IBM Watson) while I created the Chrome extension and gave it functionality in order to be able to interact with the website.

We also spent some time trying to interact with the Spotify API. Although we never figured it out, we may try again or revisit this in the future.