August 04, 2019
The following is a post sharing a small adventure I had while I was still in high school. My journal originally dated this as September 2018, which was almost a year ago, but I thought I would share it simply because of how interesting it eventually was. Also, sorry it’s been so long since my last post: I’ve just been swamped with a lot of work, but I’ve had a lot of fun projects which I will be getting around to posting on my website as soon as I have a moment to write about it.

The project was simple: I wanted to build an online shop to capitalize on fun physics-themed products and merch that people might buy, and I could donate the proceeds to benefiting a charity or donating it to the physics club on campus.

And so it begun. We’ll have a shop! Our teacher runs the website called Planet Holloway, so maybe we’ll sell Planet Holloway Answers, as we can sell answer keys to the solutions of the homework problems on his website.

In addition, we could sell Planet Holloway Air and Planet Holloway Water, which are simply jars of air and water (literally a rip-off, but wouldn’t people buy it for the novelty!?)....

With so many projects, I decided to call it Super Holloway. And since it was super, we needed to sell merch as well, which could potentially be the main revenue generator of the website.

In theory, it shouldn’t be too hard to build a quick website in Brackets, so that’s exactly what I did: 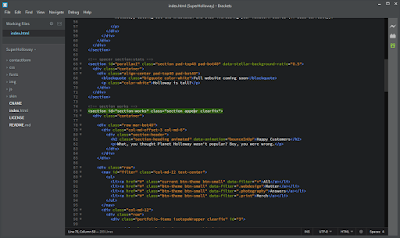 Before we move on, I just want to note that I’ve since moved away from using Brackets as a web IDE. To me, it’s second best to using VS Code because VS Code with extensions can not only match the functionality and features of Brackets (including live web development server), but it is also much more battery and performance efficient which is useful for laptops, like my Surface Pro 4 which is getting old and the battery life is not as good as it used to be.

In addition, I used a template in order to create this website, but seeing as the website is now defunct, I can’t remember what template I used to make the website, unfortunately. I hosted the page on GitHub Pages, and used the domain superholloway.ga, but if you visit that website today, it just redirects to my personal website, which you would be on right now if you are reading this post.


Anyways, this is what it looked like after some editing: 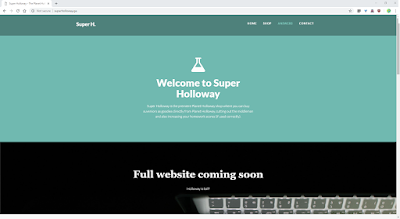 It wasn’t a full website, and that’s about the farthest I got it.

So why did this project fail? I think this project failed for a number of reasons, but one of the most notable reasons is the fact that I lost interest in the project. To me, this was a side gig that was not as interesting as it could have possibly been, yet I tried to start the project anyway. As a result, I quickly ran out of time because I did not give it any priority. Yet, in retrospect, I think the project would’ve failed anyway, even if it became a passion project. The store itself would not have generated nearly enough interest to sustain the cost of keeping it open, and the products would’ve been too expensive to produce as the demand would not have been great enough to drive the cost of manufacturing down.

In the end, this was a great project to look at, and it was a great learning experience, as I can look back and truly appreciate the different ways in which we pursue our ideas.